A Mac system on a PC, that’s possible 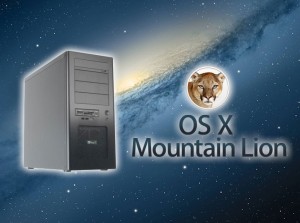 As stated previously, I’m a graphic designer, but I don’t like Macs. And I’ve got good reasons for that: why pay an expensive price for a product you can have, much cheaper, and more powerful, in the PC world? Especially when you see some expensive Macbook pros are sold around 1,800 euros, without a dedicated graphics card, just the integrated Intel chipset coming with Intel Core i microprocessors… Especially when, the PC world, often wrongly accused of copying Macs (whereas actually the copy is two way, actually even three way as both Microsoft and Apple copy from the Linux world, making user friendly innovative ideas in a system which is unfortunately not for being too difficult to use for everyday users and for not having the most popular software, Steve Jobs himself said a lot of good about copying other people’s work, saying somebody who just copied something was a bandit, but somebody who copied something to make something better out of it was a genius, which makes you wonder why while he was still alive he launched so many legal procedures against companies such as HTC or Samsung) is in fact becoming the most creative one, thanks to Windows 8: Even though I don’t consider that system as being a progress at all for normal computers, with a mouse and no touchscreen, it has the merit of trying to encourage a complete different way of conceiving computers themselves, with the hope that altogether new way will be more comfortable to people than the original concept which now dates from a few decades already, it enables having a real, full-fledged computer, in the shape of a tablet, instead of encouraging the use of multiple gadgets as Apple does with its iPad, because the iPad can be more comfortable to use for some things, but you still need a real laptop as its functions are limited, a waste of money. END_OF_DOCUMENT_TOKEN_TO_BE_REPLACED

Adobe Creative Suite 3 : a progress, or not ?

Not long ago, yet another version of Adobe Creative Suite was released. Photoshop CS3, Flash CS3, Dreamweaver CS3, Imageready… Oh, wait, no, where is Imageready? It makes me wonder, if each software has sometimes had hard to find innovation, understandable considering their complexity, each version brings its share of important changes, for example in Photoshop CS2 the way to interact with layers was a step ahead ergonomically speaking, enabling you to chose many of them in one gesture, with shift or Ctrl ( Command for Mac users ) instead of checking a box left of each layer. Flash 8 offers extraordinary possibilities directly coming from After Effects ( blur, layer blending ). But besides from a finally efficient Photoshop layers importation in Flash (It’s developed by Adobe after all) and a new script language ( the apparition of Actionscript 3, Actionscript 2 won’t have lived long, compared to the very first one. And it’s step ahead for developers who want something completely logical. Not for graphic designers for whom it’s even more complicated than before, making them have to work in team with developers when they could do everything themselves before ) it looks exactly the same as before. And in Photoshop, I don’t really see what’s new.
END_OF_DOCUMENT_TOKEN_TO_BE_REPLACED